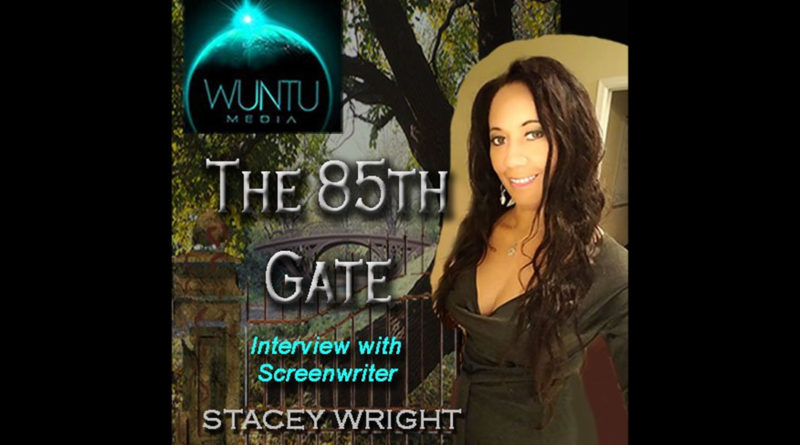 Stacey Wright, WunTu Media’s marketing director, landed a semifinalist place in a screenplay logline contest.  The contest was with the famous screenwriter’s resource Go Into the Story, a highly regarded forum associated with The Black List (the premier organization connecting screenwriters with production teams.)

We sat down with Ms. Wright to ask her about how her script idea came about and the film’s next steps:

WUNTU MEDIA: Congratulations on becoming a semifinalist! When did you first realize you can write well?

MS. WRIGHT: Thank you so much. During middle school, my language arts teacher wanted us to learn different styles of writing. She asked us to write a simple story with a moral lesson for elementary students, and to be sure to include large pictures. She kept saying to us to “Remember the audience, and keep it visual.”

It was the hardest piece I ever wrote, because we had been writing much more serious styles all year. When I finished my little book, she flipped through it really slowly and had this shocked expression on her face. She then stood up from her desk, and quickly ran out the room with it. I thought I must of did something wrong. A few very long minutes passed, and she returned with another teacher, and told me to come with her. She walked me over to a group of 4th graders that visiting that day, and asked me to read it to them right now. I went from being terrified to completely thrilled, and the story was a hit with the group. Now as an adult, I realize teachers are really wonder workers – their magic truly works decades later!

WUNTU MEDIA: How did you come up with the idea for the film, The 85th Gate?

MS. WRIGHT: Years ago, I worked in Manhattan, designing presentations and marketing material for a large consulting firm. To get a break from work, I would often walk and window shop as many New Yorkers do, during my lunch hour. It was during one of these walks, when I completely lost track of time. I didn’t realize how far I walked, until I experienced something quite strange. In fact, it was so strange, that it still upsets me years later.

WUNTU MEDIA: What happened? I can tell it really bothers you.

MS. WRIGHT: Yes it does. Bother isn’t even the word for it! It was a normal chilly fall day in Midtown, with business people and tourists everywhere. At least it was normal until I reached the edge of the park.  That’s when it happened. All of a sudden, it felt as if something terrible was about to occur, and that I should leave – fast. I looked around to see what it could be – was someone arguing, a robbery about to happen, etc., but I saw absolutely nothing wrong. However, what I felt and experienced was not right at all. I felt a tremendous amount of grief coming from the park. I know that sounds crazy, but it’s true.

I was in the city during the 9/11 attack, so my first thought was something really awful was about to happen again. But, as I turned away from the park and took a few steps back towards my office, the feeling was completely gone.

I couldn’t leave though. I had to made sure everything was fine. As I turned again towards the park, I felt this extreme grief radiating from the area. This time, it actually scared me. because it was as if it was pulling at me to come inside the park..

WUNTU MEDIA: What did you do next?

MS. WRIGHT: Well, I was done at that point! I still see anything odd at all – people were just sitting around relaxing, on their phones, and enjoying their lunch. I had know idea what was going on, but I got up out of there real fast! I must of made it back to my office in less than five minutes. My co-workers told me I looked like I seen a ghost. I actually wished I had seen one – I could deal with that. This was different. I knew I had felt something terrible that didn’t make any sense at all.

WUNTU MEDIA: What made you decide to look into it further?

MS. WRIGHT: Months passed, years passed, and I just couldn’t let go of it. Eventually, I finally gathered up enough courage to start looking into what it could be. I knew of other devastating events from the park that made national news, but nothing that was regarding what seemed to be a large group of people.

From my research, and with the help of historians, I’ve been able to understand a great deal about the area and what occurred there. Slowly, the facts and figures turned to real people, real families, and now real characters in my script with real emotion. I had to write it down. It’s the only way I could deal with what I experienced that day, and what I still feel now when I walk near the park. As much as I love New York, my hope is the film, The 85th Gate, will bring at least a little bit of justice to those who have been waiting a long time.

WUNTU MEDIA: What are your next steps with the project?

MS. WRIGHT: I’m not at liberty to say much more about the project itself, but we are in the final stages of assembling our production team to move forward. I’m really excited about seeing the words on the pages turn into live action, and sharing the story with the world.

WUNTU MEDIA: Any other writing projects in development?

MS. WRIGHT: Yes, I’m completing a series of young adult books to accompany the film. In addition, I’m writing a scene by scene breakdown of the blockbuster Black Panther, which will be published on Go Into the Story, as part of their script analysis series.

Out of all of my work, perhaps my proudest achievement is the book my daughter and I are co-writing about our journey while learning about her mental health illness.  When her father and I first realized she was having difficulties, there wasn’t enough information out there on children with mental illnesses, so we spent a great deal of time, years actually, with different doctors, hospitals, and other professionals gathering as much insight as we could, and trying different therapies to help her the best. Our goal with the book is to cut that time down, so that parents can know where to go for help faster, and so that children can enjoy their lives as much as possible. My daughter is also a poet and artist, so we are including her work in the book as well.

WUNTUMEDIA: That sounds wonderful and I’m sure families in the same situation would appreciate that. Thank you again for your time today.

For more information on The 85th Gate, contact us at The85thGate@WunTuMedia.