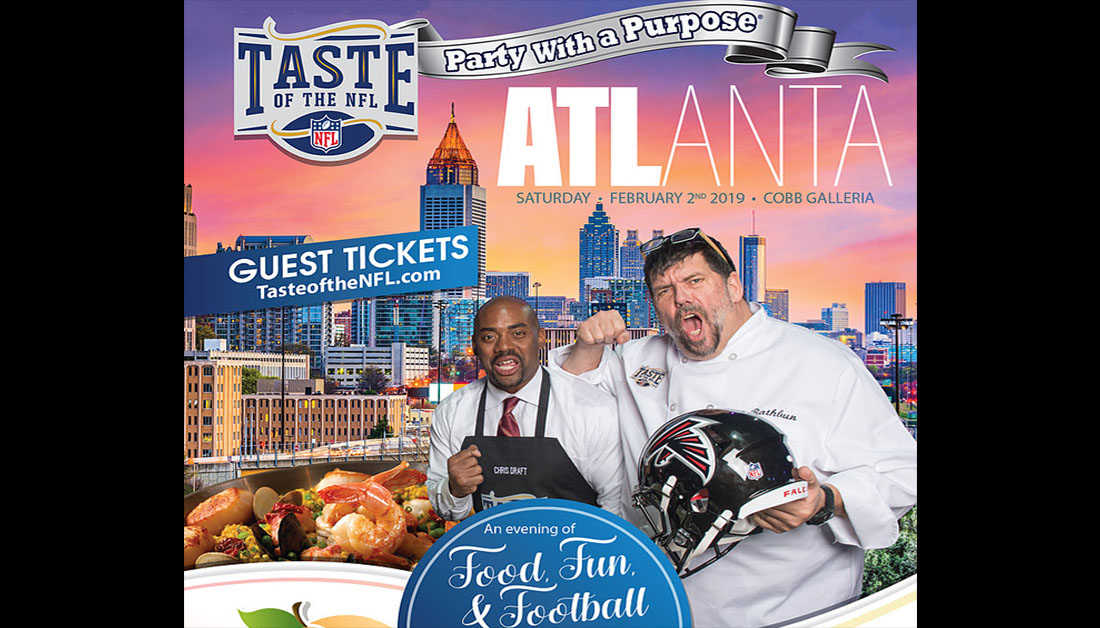 As you read this, millions of people in America are struggling with hunger. In fact, 1 out of 6 people in our country face this serious issue – many of them are children and seniors. For over 25 years, Taste of the NFL has been working to kick hunger.  While they’re proud to report that they’ve raised more than $25 million during that time, they’re saddened to report that the need to do more is greater than ever.  They hope you’ll support their efforts by becoming a contributor or partner in their mission.  TNFL Founder and culinary entrepreneur, Wayne Kostroski, has led this charge since 1992.

The Taste of the NFL’s annual strolling wine and food event features a chef from each NFL city serving their signature dish alongside a current or alumni NFL player. The result? 35+ food stations where guests can sample fine cuisine, meet and mingle with renowned chefs and NFL greats and participate in a silent auction with unique sports memorabilia and other exciting items.

The Super Bowl eve TNFL event is attended by numerous celebrities and America’s business elite who share in our belief and join in our efforts to eradicate hunger. It is covered by local and national media outlets like Today, ESPN, Good Morning America and others.

Each year, net proceeds from the Taste of the NFL’s programs and events are donated to designated Feeding America affiliated food banks in each of the 32 NFL team cities, as well as other select hunger relief organizations.

25 years of fighting hunger has resulted in 200 million meals changing the lives of families across America through the Taste of NFL’s food bank partnerships.

This year’s premier Taste of NFL event takes place on Saturday, February 2, 2019 in Atlanta at the Cobb Galleria.

In addition, from New York to Dallas, NFL teams and hunger relief organizations have teamed up to offer local residents exciting Taste of the NFL events in several NFL cities.  Whether it is a strolling food and wine event, an elegant sit-down dinner, or a tailgate complete with live entertainment, the ultimate goal of the local events is to raise increased awareness and dollars that will help fight hunger in their community.

Can’t attend the annual party?  You can still help! Kick Hunger Challenge is a year round way to help your favorite NFL team raise the most money in the challenge.  Donate Now!

For tickets and more information on the Taste of NFL, visit their website at TasteoftheNFL.com​​