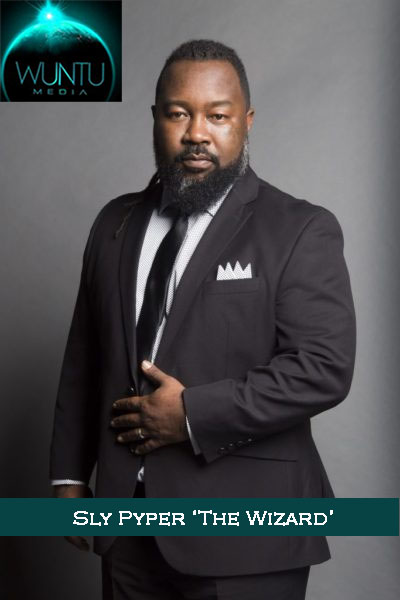 Proven to be gifted at a very young age, Florida native Sly Pyper ‘The Wizard’ has shared his masterful artistry across the spectrum of the music industry for over two decades.

As a saxophone prodigy, he always had an ear for unique sounds.  He then developed his talent as a jazz musician, and travelled the world.  It was at that time while playing in top venues, when he began to write and produce songs for several different artists.

The song writing and producing opportunities began to arise and became more lucrative as Sly discovered he had another God given talent.   He digged into his the creative industry on all levels: writing, vocal arranging, producting, and of course, singing.

Sly’s talent eventually caught the ear of the legendary Dr. Dre, and he began working with Aftermath artists such as Eminem, 50 Cent, Kendrick Lamar, and the newest breakout artist on the roster Anderson Paak.  He has worked with top rappers in the Hip Hop world, and various A list Pop stars, such as Snoop Dogg, Kelly Rowland, R. Kelly, JoJo, and Jessica Simpson to name a few.

Also known as the HookMaster, Sly has written and/or performed hooks for artists such as The Game, Slaughterhouse, and his most notable to date FASTLANE with Eminem and Royce the 5’9.  He is also sprinkled over the entirety of Dr. Dre’s ‘Compton’ album.  Furthermore, Sly has also done well in the Pop world as he was directly involved with the overnight success of Sean Kington’s single ‘Beautiful Girls.’

Sly’s range has no boundaries.  With his involvement on numerous gold and platinum projects, his record speaks for itself.  He is not only a songwriter with a knack for lyrics that touch the heart, but an artist that can vocally and instrumentally touch the soul of the people.