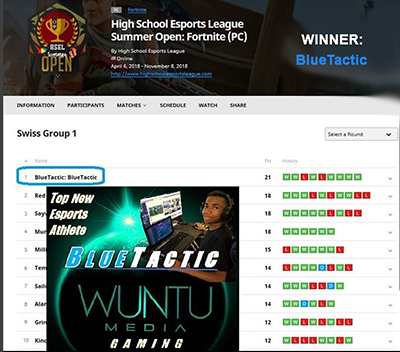 The young gamer began getting serious about gaming at age 12 with OverWatch, where he played alongside Grand Master level players.  During a strong effort at MomoCon 2018, Blue’s team was only defeated by the Clemson University Esports team.

Currently, Blue continues to show his strong skills in Fortnite, and regularly practices with Pro players.  In addition, the HSEL recently interviewed him on his thoughts on the new Fortnite season.

With the esports and gaming community gaining more attention in the sports world, BlueTactic is one gamer to surely keep an eye on.