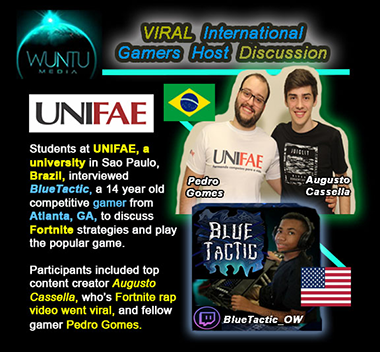 Together, they asked BlueTactic questions regarding the popular game Fortnite:

STUDENTS:  When did you start playing Fortnite?

BlueTactic:  I started during Season 3, but I didn’t have the Battle Pass because I wasn’t grinding at that time.

STUDENTS:  How many hours a day you play?

BlueTactic:  For how long I play, I don’t know exact numbers but in season 4, I was in the top 0.1% of people in games played.

STUDENTS:  How did all start for you Josh? Was it a natural thing?

BlueTactic:  My friend wanted me to try it in Season 2 or maybe 1.  I didn’t really like it at first because I had no idea what I was doing and they weren’t very helpful.  In my opinion, natural is not really a thing.  I played like 700-1100 games before I got a single win I just don’t give up.  All I think about is doing “better than yesterday.”

STUDENTS:  How do you see this new world profession that is streaming and professional playing?

BlueTactic:  I see pro play and streaming as the hardest grinder wins always. For example, Ninja played games for 7 years before getting where he is now.

STUDENTS:  Have you ever thought that playing would be a making money thing?

BlueTactic:  I really don’t do it for the money. If I did, I’d be somewhere else.  I never really thought about it as a money thing.

STUDENTS:  Which pro player you inspires you?

BlueTactic:  Mainly Chap, Tfue Faze – a little bit of everyone.

STUDENTS:  Who is your personal favorite player?

STUDENTS:  Which weapon do you play best?

BlueTactic:  My favorite weapon is the hunting rifle. Too bad it got nerfed.

STUDENTS:  Do you have any tips, for newbies?

BlueTactic:  Aim is not what you should work on. It’s game sense.  BRAIN > AIM always wins and grind your brains out.

STUDENTS:  What is your higher kill streak?

BlueTactic:  My highest kill is probably like 20-25, I’m not sure. Though it’s a lot harder to get 20/30 bombs because everybody dies too fast.

STUDENTS:  Do you prefer to play solo, duo or squad and why?

BlueTactic:  I like solo the most because it’s the best to improve. When I master that, maybe I’ll do duos for 1v2.  Practice squads is trash.

STUDENTS:  How does the league that you play work?

BlueTactic:  FNplayer League is run by the same people that run the Pro Discord.

STUDENTS:  Do you spend a lot of Money in skins? Or you control yourself?

BlueTactic:  The only thing I buy is the battle pass and I bought 1 harvesting tool. It’s called the studded axe and that’s because it’s extremely quiet.  Buying stuff is stupid because just how much they are spending is too much.  I’m the type of guy that buys a game and plays it for 3 years or sometimes longer.

STUDENTS:  Do you think that Double Pump should come back to the game?

BlueTactic:  Double pump is never coming back and it shouldn’t.

STUDENTS:  What do you expect of season 6?

BlueTactic:  I have no clue – just can’t wait until these low grav things go away.

STUDENTS:  What do you think about the puzzles that Epic games put in the game?

BlueTactic:  I don’t care about the puzzles.  It doesn’t affect the game at all.

BlueTactic is represented by WunTu Media, and streams regularly on Twitch.tv at BlueTactic_ow.  He can also be followed on Twitter and Instagram.