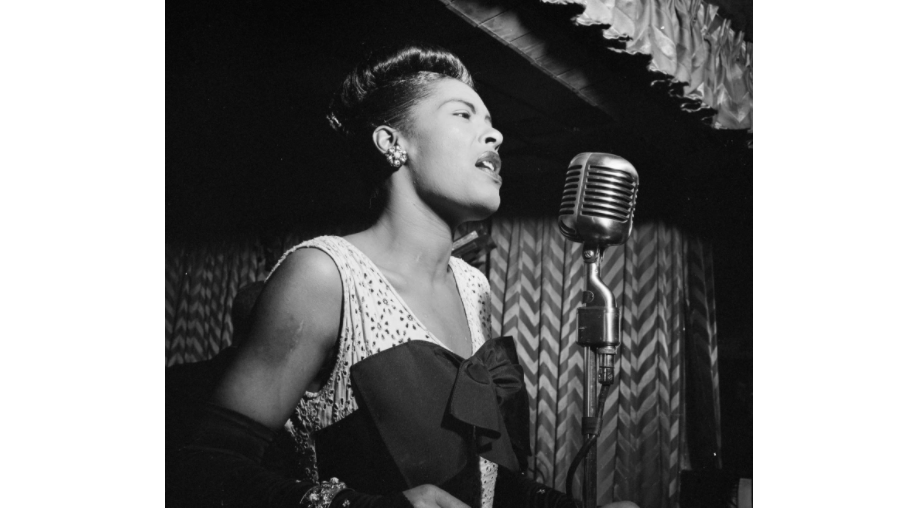 Eleanora (her preferred spelling) Harris was the daughter of Clarence Holiday, a professional musician who for a time played guitar with the Fletcher Henderson band. She and her mother used her maternal grandfather’s surname, Fagan, for a time; then in 1920 her mother married a man surnamed Gough, and both she and Eleanora adopted his name. It is probable that in neither case did her mother have Eleanora’s name legally changed. The singer later adopted her natural father’s last name and took the name Billie from a favorite movie actress, Billie Dove. In 1928 she moved with her mother from Baltimore, Maryland (where she had spent her childhood), to New York City, and after three years of subsisting by various means, she found a job singing in a Harlem nightclub. She had had no formal musical training, but, with an instinctive sense of musical structure and with a wealth of experience gathered at the root level of jazz and blues, she developed a singing style that was deeply moving and individual.

In 1933 Holiday made her first recordings, with Benny Goodman and others. Two years later a series of recordings with Teddy Wilson and members of Count Basie’s band brought her wider recognition and launched her career as the leading jazz singer of her time. She toured with Basie and with Artie Shaw in 1937 and 1938 and in the latter year opened at the plush Café Society in New York City. About 1940 she began to perform exclusively in cabarets and in concert. Her recordings between 1936 and 1942 marked her peak years. During that period she was often associated with saxophonist Lester Young, who gave her the nickname “Lady Day.”

In 1947 Holiday was arrested for a narcotics violation and spent a year in a rehabilitation centre. No longer able to obtain a cabaret license to work in New York City, Holiday nonetheless packed New York’s Carnegie Hall 10 days after her release. She continued to perform in concert and in clubs outside of New York City, and she made several tours during her later years. Her constant struggle with heroin addiction ravaged her voice, although not her technique.

Holiday’s dramatic intensity rendered the most banal lyric profound. Among the songs identified with her were “Strange Fruit,” “Fine and Mellow,” “The Man I Love,” “Billie’s Blues,” “God Bless the Child,” and “I Wished on the Moon.” The vintage years of Holiday’s professional and private liaison with Young were marked by some of the best recordings of the interplay between a vocal line and an instrumental obbligato. In 1956 she wrote an autobiography, Lady Sings the Blues (with William Dufty), that was made into a motion picture starring Diana Ross in 1972. Holiday’s health began to fail because of drug and alcohol abuse, and she died in 1959.