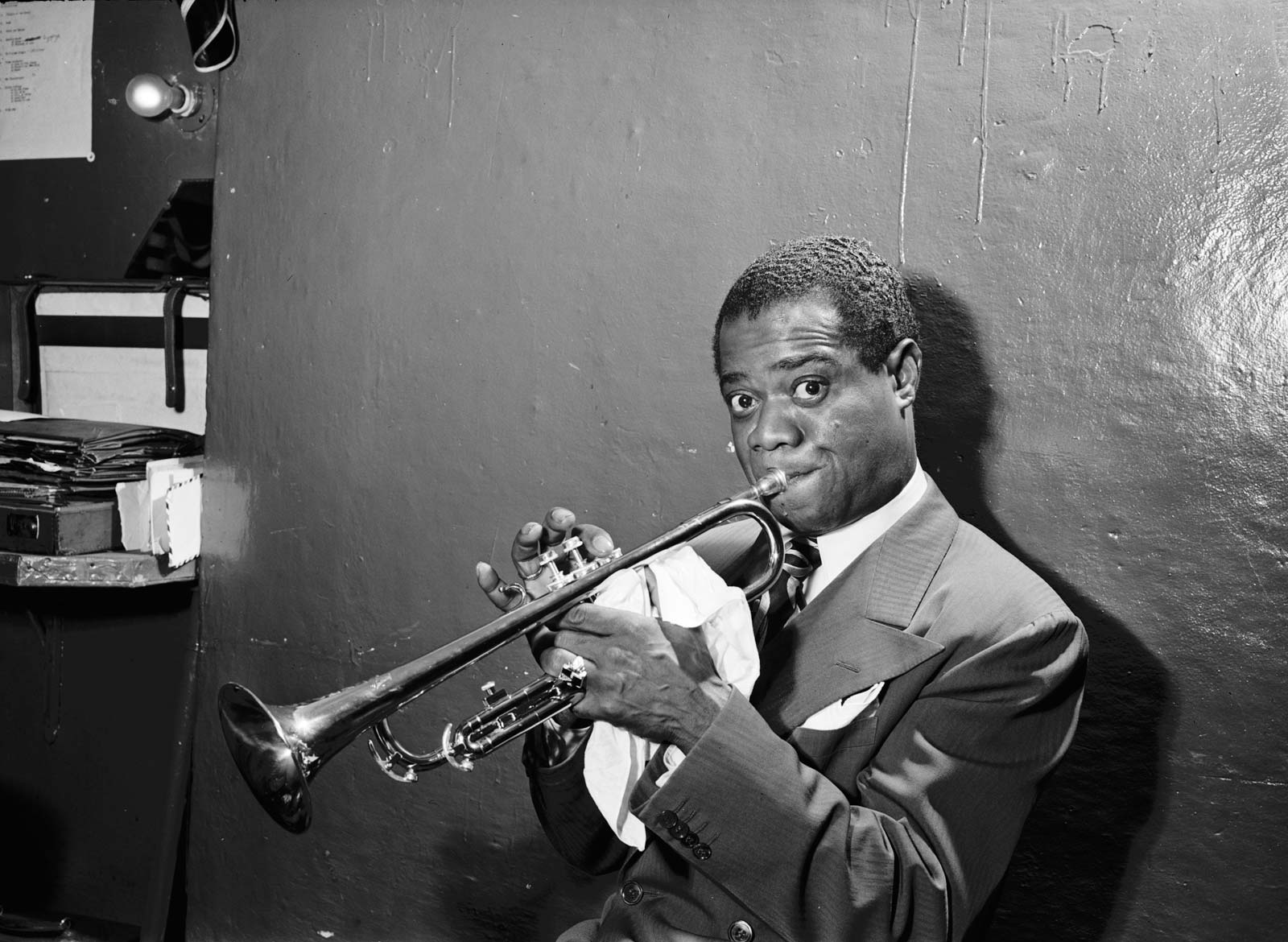 Although Armstrong claimed to be born in 1900, various documents, notably a baptismal record, indicate that 1901 was his birth year. He grew up in dire poverty in New Orleans, Louisiana, when jazz was very young. As a child he worked at odd jobs and sang in a boys’ quartet. In 1913 he was sent to the Colored Waifs Home as a juvenile delinquent. There he learned to play cornet in the home’s band, and playing music quickly became a passion; in his teens he learned music by listening to the pioneer jazz artists of the day, including the leading New Orleans cornetist, King Oliver. Armstrong advanced rapidly: he played in marching and jazz bands, becoming skillful enough to replace Oliver in the important Kid Ory band about 1918, and in the early 1920s he played in Mississippi riverboat dance bands.

Fame beckoned in 1922 when Oliver, then leading a band in Chicago, sent for Armstrong to play second cornet. Oliver’s Creole Jazz Band was the apex of the early, contrapuntal New Orleans ensemble style, and it included outstanding musicians such as the brothers Johnny and Baby Dodds and pianist Lil Hardin, who married Armstrong in 1924. The young Armstrong became popular through his ingenious ensemble lead and second cornet lines, his cornet duet passages (called “breaks”) with Oliver, and his solos. He recorded his first solos as a member of the Oliver band in such pieces as “Chimes Blues” and “Tears,” which Lil and Louis Armstrong composed.

Encouraged by his wife, Armstrong quit Oliver’s band to seek further fame. He played for a year in New York City in Fletcher Henderson’s band and on many recordings with others before returning to Chicago and playing in large orchestras. There he created his most important early works, the Armstrong Hot Five and Hot Seven recordings of 1925–28, on which he emerged as the first great jazz soloist. By then the New Orleans ensemble style, which allowed few solo opportunities, could no longer contain his explosive creativity. He retained vestiges of the style in such masterpieces as “Hotter than That,” “Struttin’ with Some Barbecue,” “Wild Man Blues,” and “Potato Head Blues” but largely abandoned it while accompanied by pianist Earl Hines (“West End Blues” and “Weather Bird”). By that time Armstrong was playing trumpet, and his technique was superior to that of all competitors. Altogether, his immensely compelling swing; his brilliant technique; his sophisticated, daring sense of harmony; his ever-mobile, expressive attack, timbre, and inflections; his gift for creating vital melodies; his dramatic, often complex sense of solo design; and his outsized musical energy and genius made these recordings major innovations in jazz.

Armstrong was a famous musician by 1929, when he moved from Chicago to New York City and performed in the theatre review Hot Chocolates. He toured America and Europe as a trumpet soloist accompanied by big bands; for several years beginning in 1935, Luis Russell’s big band served as the Louis Armstrong band. During this time he abandoned the often blues-based original material of his earlier years for a remarkably fine choice of popular songs by such noted composers as Hoagy Carmichael, Irving Berlin, and Duke Ellington. With his new repertoire came a new, simplified style: he created melodic paraphrases and variations as well as chord-change-based improvisations on these songs. His trumpet range continued to expand, as demonstrated in the high-note showpieces in his repertoire. His beautiful tone and gift for structuring bravura solos with brilliant high-note climaxes led to such masterworks as “That’s My Home,” “Body and Soul,” and “Star Dust.” One of the inventors of scat singing, he began to sing lyrics on most of his recordings, varying melodies or decorating with scat phrases in a gravel voice that was immediately identifiable. Although he sang such humorous songs as “Hobo, You Can’t Ride This Train,” he also sang many standard songs, often with an intensity and creativity that equaled those of his trumpet playing.

Louis and Lil Armstrong separated in 1931. From 1935 to the end of his life, Armstrong’s career was managed by Joe Glaser, who hired Armstrong’s bands and guided his film career (beginning with Pennies from Heaven, 1936) and radio appearances. Though his own bands usually played in a more conservative style, Armstrong was the dominant influence on the swing era, when most trumpeters attempted to emulate his inclination to dramatic structure, melody, or technical virtuosity. Trombonists, too, appropriated Armstrong’s phrasing, and saxophonists as different as Coleman Hawkins and Bud Freeman modeled their styles on different aspects of Armstrong’s. Above all else, his swing-style trumpet playing influenced virtually all jazz horn players who followed him, and the swing and rhythmic suppleness of his vocal style were important influences on singers from Billie Holiday to Bing Crosby.

In most of Armstrong’s movie, radio, and television appearances, he was featured as a good-humoured entertainer. He played a rare dramatic role in the film New Orleans (1947), in which he also performed in a Dixieland band. This prompted the formation of Louis Armstrong’s All-Stars, a Dixieland band that at first included such other jazz greats as Hines and trombonist Jack Teagarden. For most of the rest of Armstrong’s life, he toured the world with changing All-Stars sextets; indeed, “Ambassador Satch” in his later years was noted for his almost nonstop touring schedule. It was the period of his greatest popularity; he produced hit recordings such as “Mack the Knife” and “Hello, Dolly!” and outstanding albums such as his tributes to W.C. Handy and Fats Waller. In his last years ill health curtailed his trumpet playing, but he continued as a singer. His last film appearance was in Hello, Dolly! (1969).

More than a great trumpeter, Armstrong was a bandleader, singer, soloist, film star, and comedian. One of his most remarkable feats was his frequent conquest of the popular market with recordings that thinly disguised authentic jazz with Armstrong’s contagious humour. He nonetheless made his greatest impact on the evolution of jazz itself, which at the start of his career was popularly considered to be little more than a novelty. With his great sensitivity, technique, and capacity to express emotion, Armstrong not only ensured the survival of jazz but led in its development into a fine art.

Armstrong’s autobiographies included Swing That Music (1936) and Satchmo: My Life in New Orleans (1954). The house that he shared with his fourth wife, Lucille Wilson, in Queens, New York City, from 1943 until his death in 1971 was preserved as the Louis Armstrong House Museum, which also maintained his archives.